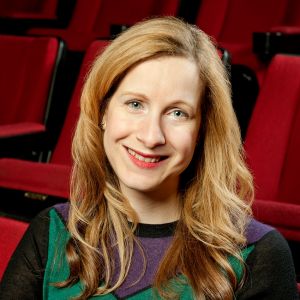 Beth Gilligan relocated to Brookline in 2009 to join the team at the nonprofit Coolidge Corner Corner Theatre Foundation, where she currently serves as the Deputy Director. Her responsibilities include fundraising (including the $12.5M theatre expansion project that is currently underway), marketing, events, communications, programming, and the national Science on Screen grant initiative. Prior to joining the Coolidge, she worked for several years for the Hamptons International Film Festival, where she oversaw marketing and development initiatives (including the Alfred P. Sloan Foundation Film & Screenwriting Program) and later served as a Festival Consultant.

Beth received a M.A. in film studies from the University of East Anglia (United Kingdom) and a B.A. in English Literature from Trinity College (Hartford, Connecticut). She and her husband Lodewijk live in Brookline with their two daughters, who attend Driscoll Elementary School. Beth serves as Secretary for the Driscoll PTO, as well as Annual Family Giving Campaign Chair, Room Parent Coordinator, Village Leader, and Room Parent. In Spring 2021, she was selected as a parent representative for the Driscoll School Principal Search Committee.